It’s been a while, the longest while since I started this blog in fact. I got an email from Google last week letting me know that the site wasn’t mobile […]

It’s been a while, the longest while since I started this blog in fact. I got an email from Google last week letting me know that the site wasn’t mobile friendly anymore, so I logged on to fix it, and saw that I didn’t post anything at all here in 2014. I’ve still been online, just sharing my thoughts in other places like Twitter, Facebook and commenting on various other sites. I’ve added links to the menu above so you can check them out if you’re so inclined. I haven’t even really been that active on those places in the last few months because I always seem to be out of time.

In the years since I’ve started this blog, the amount of things available to fill my free time has grown considerably. I’ve upgraded my TiVo to a modern unit that’s capable of recording six channels at once. There’s shit on there from last year, entire seasons of shows that I haven’t got around to watching because there’s not enough time in the day. I still haven’t watched The Knick, Extant, or Gang Related (which I just learned was cancelled when I looked for the link to the show, that’s what I get for trying to avoid spoilers); I haven’t watched Halt And Catch Fire either and they added it to Netflix already, so I might as well delete those and make space for shit I won’t get around to watching until Christmas.

Speaking of Netflix, I thought the whole point of that shit was they would have the shows available so you can watch them later on, and they do, but somehow they felt the need to add additional shit to watch?!? I still haven’t seen the second season of Orange Is The New Black, so you know there’s definitely not enough time in my life if I can’t find any for sexy former teen star prison lesbians (that last one is also partially down to Netflix, because they keep recommending “Movies With A Strong Female Lead,” and I watch them, because it’s never V.I. Warshawski or Foxy Brown, it’s always Reaching For The Moon or Lost & Delirious, so I’ll leave it to you to decide what “Movies With A Strong Female Lead” is code for, because I generally don’t think of The Silence Of The Lambs when I masturbate, I think of Jessica Paré).

Here’s a gratuitous close up photo of Jessica Paré’s pussy.

Well, I don’t generally think of Jessica Paré when I masturbate, I think of various women depending on what mood I’m in. She’s just on my mind right now, because I was thinking Mad Men is ending in a few weeks, so once I get that out of the way, I can catch up on some of the others. Glee and Justified both ended recently so I was able to finally watch some Worricker shows that aired six months ago on PBS. Man, I really do feel like a time traveler sometimes because I don’t generally keep track of it. I keep track of time, like, I know if I have to go to work on Tuesday, I just don’t look at dates and shit generally. Yes, I work; you didn’t really think I spent all day watching TV and jerking off, did you? Truth be told, I spend more time looking for work than actually working, and when I do work, I can’t talk about it, because I usually have to sign a Non Disclosure Agreement these days because they don’t want anyone to reveal spoilers and rants and things of that sort, and since I signed the NDA, I won’t because I’m a fucking professional!

What I’m getting at is even though I know what’s going on the world factually, culturally I’m a bit lost. Cultural references and conversational shorthand come from the various media we consume, whether it’s books, music, motion pictures (for the purpose of this discussion, my broad definition of motion pictures includes moving pictures of a non interactive sort, such as movies, television shows, videos, etc.) and/or interactive games/simulations. I’m not out of touch by years, more like weeks; I just miss some references here and there and feel a bit out of the loop. Earlier in the year, people started talking about Cookie, how much they love Cookie, how tough Cookie is, how sassy Cookie is, so on, infinity, etc. and I thought this was running on cable:

Ok, maybe I am out of touch by years. The point is, I’ve been so busy living my life and pursuing my various interests that I haven’t made time to write about my life and various interests here. I really should, I do have some subscribers and you might even be one of them. I’m going to make an effort to update this thing more often than twice a year. It’ll be more of the same: music, movies, tv, wrestling, life, family and all other kinds of stuff. Tell your friends. If you have any suggestions about what I should post here, make ’em below. Buying me something nice would help. My birthday is coming up. If it helps, here’s one last inspiring photo of Taraji P. Henson. 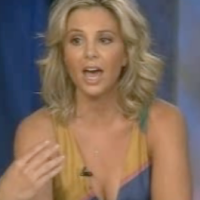 smile on The Web

unless otherwise noted, all material on this site is
© copyright smile from The Lower East Side