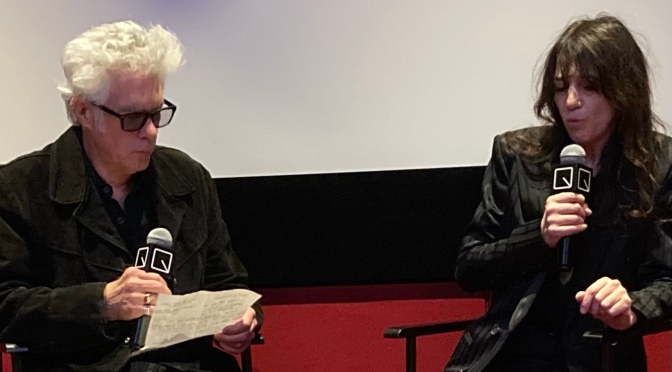 International icon Charlotte Gainsbourg does a Q&A with some guy from the neighborhood, Jim Jarmusch, after a screening of her new movie, Jane by Charlotte at the Quad Cinema in Manhattan.

It’s been a while since I’ve posted anything on the Police Academy documentary. Got an email update yesterday from the team:

We finally got Steve Guttenberg on board and his 3-hour interview was amazing, but really reshaped the narrative of the doc. We tried to insert him in where he was needed but in the end, we felt we needed to start the edit from scratch. We strongly believe that this was the right decision and now the doc is shaping into something very special. We will have a more detailed update soon!

Hey, you got 10 minutes? That’s about how long this sizzle reel is:

If the embedded video doesn’t load, click to watch
What An Institution! The Story of Police Academy (2019) Exclusive 10-minute Preview
at YouTube.

What An Institution! The Story of Police Academy is in production now. The team is still collecting interviews, but here’s a list of confirmed participants:

The film is scheduled for release in 2019. I’ll post updates here from time to time, but if you’re on Facebook, you can follow the project here.

Been a while since I posted anything new, and it’ll be a while longer. If you’ve been here before you might have noticed that I’ve updated the design of the site and I’m now going through it and fixing broken links and whatnot. Just to post something (sort of) fresh, I’m recycling a comment I made on a Police Academy post at The AV Club six years ago. I know, you’re thinking, “A comment?!? Seems like a pretty half assed thing to repurpose!” It’s not; the comment is about 1300 words of objectively deep insight. I was intending to write a thesis further expanding on the those ideas, but never did.

So, why this? Why now? Last month, I became an Executive Producer on the documentary, What An Institution! The Story of Police Academy. I’m the guy who spit out 1300 words off the top of my head on Police Academy, what did you expect me to produce? “A reboot,” you say. Sure, I’d love to, but I doubt that AT&T is going to replace Academy Award winning auteur Jordan Peele with little old me. I’m not really doing any of the heavy lifting on the project, that’s being taken care of by director Gary Smart and the team at Cult Screenings UK with assists from Paul Maslansky and Adam F. Goldberg. Shooting starts this week, so keep your eyes peeled for What An Institution! in 2019. Until then, enjoy this: END_OF_DOCUMENT_TOKEN_TO_BE_REPLACED